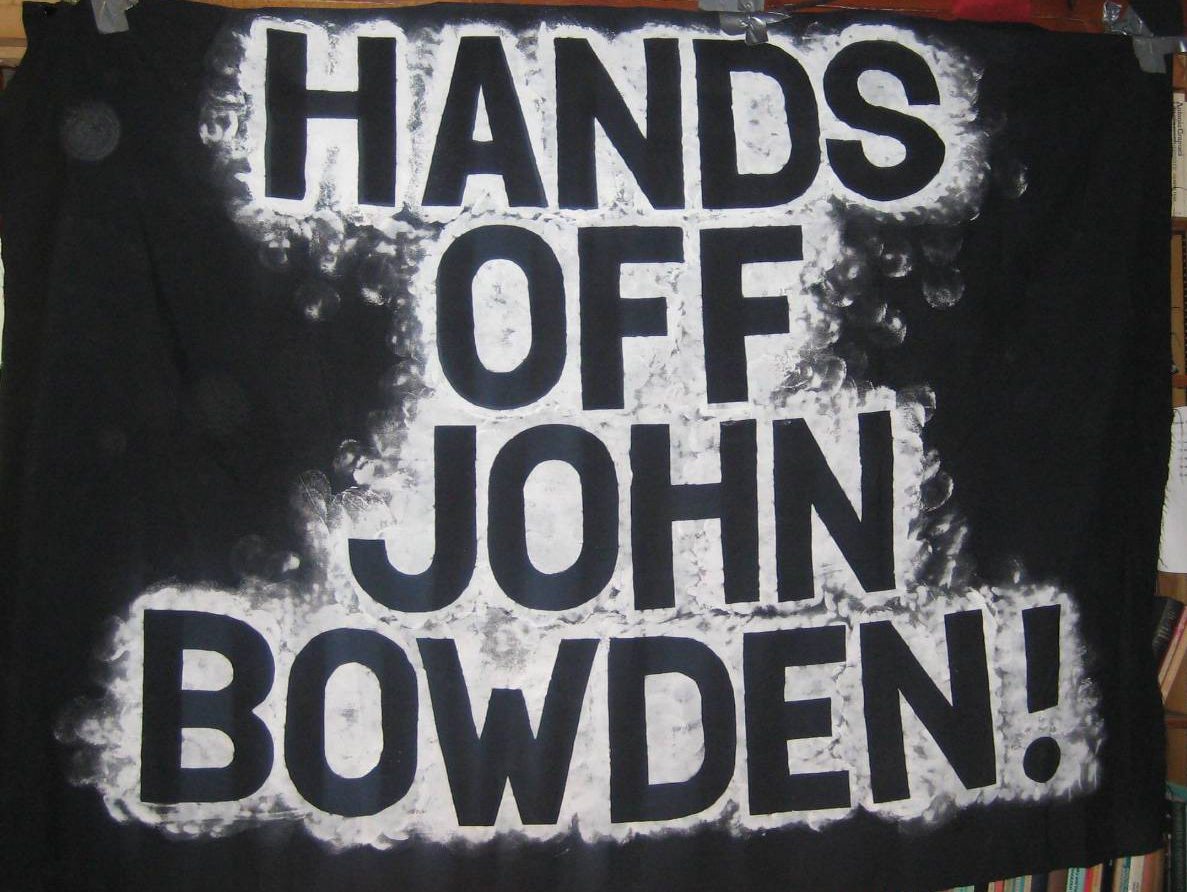 Show your support for John Bowden, a vocal writer and critic of the system we all live under, who is in Greenock Sheriff Court in Scotland, on Friday 24th June, after being accused of assault on a prison guard.

Throughout the 1980’s and 90’s, John Bowden was at the forefront of the British prison struggle, leading and being involved in serious acts of resistance against the prison system, and was deeply politicised by the experience. Viewed by most prison staff as a committed and dangerous “trouble-maker”, John was often brutally punished, suffering years of brutality and prolonged solitary confinement. He has been victimised, in one way or another, ever since.

In June of last year, after hearing the evidence of an independent psychologist, the Parole Board decided that after 30 years in prison, John Bowden represented no real risk or danger to the community, and like the two men originally imprisoned with him in 1982, who were released almost 20 years ago, he should now be returned to that community. The Parole Board therefore asked the Scottish Prison Service (SPS) to transfer John to an open prison in preparation for release twelve months later. At the parole hearing itself, a representative of the SPS agreed to comply with the Board’s request. In reality, however, the SPS had absolutely no intention of preparing John Bowden for release, or even allowing him out of maximum security conditions. The orchestration of the prison authorities against him has been considerable, and has included “arbitrary and illogical decisions” and “abuses of power” by those in the prison system and linked to it. John has also been the victim of lies told by a criminal justice system social worker, supposed to be “supervising” him. The same employee of Edinburgh City Council also failed to produce the necessary ‘social worker report’ containing a plan for his post-release supervision.

John has also been moved around prisons constantly in order to destabilise him and make his situation more difficult. This has had the affect of making communication between John and the outside world harder, and prevented him forming friendships inside the prisons, as other prisoners are able to do.

John has written “instead of keeping my head firmly down and conforming unquestioningly, no matter how wrong and unfair my treatment, I had sought to highlight it and place it in the wider political context of prison/state abuse of power”.

After an attack on a fellow prisoner, John stepped in to intervene. A guard then took John to one of the very few places within the prison that aren’t covered by surveillance cameras & started pushing him repeatedly in the chest, then when John eventually pushed his hand away the guard over dramatically threw himself to the floor. Despite sustaining no injuries the guard then took a period of time off work with “stress” from the incident. It was clearly a pre-planned set up to have John charged with assault & therefore moved back out of open prison conditions and away from any chance of preparations for his release. John is therefore pleading not guilty to the charge.

We are a number of prisoner solidarity groups that include Brighton ABC, Manchester ABC, London ABC, Bristol ABC, Empty Cages Collective and Black Pigeons Collective, Switzerland. We support the solidarity action in Greenock near Glasgow, and ask that you take action on the day of the trial or show solidarity in any way that you feel that you can.

What you can do:

a) Come to Glasgow and join the court protest from 9.30am on Friday June 24th at Greenock Sheriff Court (PA15 1TR) where John is on trial. Sleeping spaces available the nights before and after. We will travel together to Greenock – bring banners or posters and a bike if you can, bikes should be available to borrow if you can’t. Lifts may also be available for anyone who can’t cycle.

b) Write to the governor of Whitemoor prison, challenging the politically motivated decision to categorise John as an escape risk the last time John was in an English prison:

d) Organise a demo or banner drop outside your local prison or somewhere in your town or city. And take a photo that we can collate and pass on to John Bowden.