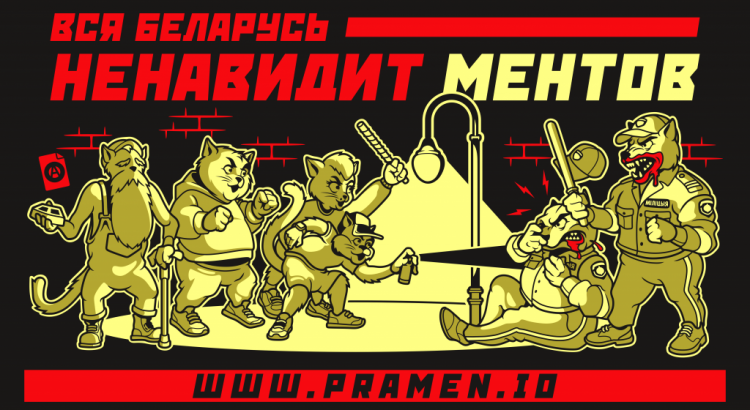 In the beginning of March Anastasiya Kukhta faced criminal prosecution. Initially she had been detained on 17 February on administrative charges, her apartment had been searched and she had been sentenced to 15 days of arrest. On 4 March, she became a suspect in a criminal case, and on 12 March she was charged with organisation of action grossly violating the public order (article 342.1 of the Criminal Code). She remains in custody in SIZO-1 in Minsk.

On 11 March anarchist Mikita Jemialjanau was convicted by judge Aksana Ratnikava for “a malicious violation of the imprisonment regime” (article 411, part 2 of the Criminal Code) to two additional years of imprisonment. Taken together with the rest of his initial sentence, it amounts to three and a half years of imprisonment. Court proceedings took place at the territory of prison nr. 4 in Mahilioŭ.
Mikita acknowledged facts of minor insubordination to prison administration (e.g. refusal to name himself during the check-up), but refused to acknowledge any guilt. He explained that all facts of insubordination took place in protest of violation of his rights by prison administration (e.g. right to correspondence, religious rights).
He repeatedly refused to stand up in presence of the judge, also when pronouncing his last word.
Mikita’s lawyer insisted that the whole case was technically faulty, and Mikita should have been acquitted. Under current legislation, the criminal case against Mikita should have been opened within one year after previous punishment for insubordination to prison administration. In reality, proceedings were started by half an year after the deadline.

On 17 March Mikita’s family tried to meet him, but prison administration cancelled the meeting by sending Mikita to punishment isolation cell.
Head of the prison told family members that Mikita will start receiving letters after he will stop fighting for his rights, and proposed family members to ‘influence’ Mikita. Relatives are not going to subsume to such blackmail.
Mikita was kept in punishment isolation cell for 10 days from 17 March. He spent his birthday (24 March) there.

After his transfer to the colony nr. 9 on 12 February, Mikola Dziadok was placed to the punishment isolation cell four times. Time of his meeting with the lawyer was limited, a small parcel from relatives was not delivered, and his correspondence was blocked.
In the colony, prison administration scared inmates through all means possible, demanding not to have any contacts with Mikola. Prisoners who continued to talk to him were deprived of correspondence. To protest it, on 10 March Mikola refused to work.
For this, he was punished with four months of stay in a closed prison cell. Two inmates who had been contacting Mikola, were placed to the punishment isolation.
On 22 March Mikola’s father attempted to pass to him a parcel, but prison officials did not accept it.

On 16 March Dzmitry Dubouski was placed to punishment isolation cell for unknown reason. Later his term in isolation cell was prolonged until 5 April.

On 22 March homes of ten antifascists and punk musicians from Mazyr were raided. Two were detained on criminal charges: Krystsina Charankova is accused of ‘inflaming social hatred’ against cops (article 130 of the Criminal Code), Anna Pyshnik faces charges of ‘assistance to extremist activity’ (article 361-4). Both are in jail in Homiel.
Other faced administrative punishment: Aliaksandr Dzeravien’ka, Anton Bialiak, Albert Zubarau, Andrej Otchyk were sentenced to 10 days of arrest, Arciom Shkirman – to 15 days of arrest, Fiodar Charankou – to a fine.

On 29 March the court hearing started of a case of four anarchists: Aliaksandr Bialou, Jauhien Rubashka, Artsiom Salaviej and Artsiom Salaviej (two persons with same name and surname, not relatives). On the suggestion of prosecutor Aliaksandr Ramanovich, judge Aliena Misnik closed the hearing to public.