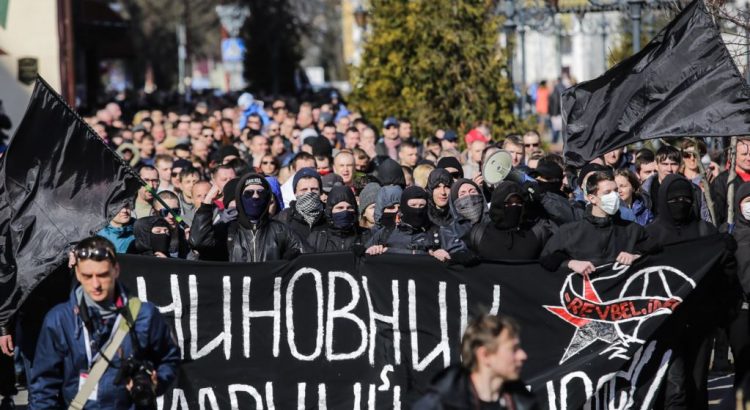 According to the media, human rights defenders and police reports, at the end of January 2021 additional charges were brought against anarchists Akihiro Hanada-Gayewski, Andrei Chepyuk and Aliaksandr Frantskevich. They were accused of participation in a criminal organisation (Article 285.2 of the Criminal Code). In the middle of February, a similar charge was brought against human rights activist Marfa Rabkova.

Starting from March 2, 2021, activists and young people, who were likely to be on the police list as politically unreliable, were being detained in Brest. All in all, we know about the detention of seven people, including Aleksandr Kozlyanko, Andrei Marach, Pavel Shpetny, Nikita Dranets, Daniil Chul and Aleksei Golovko. There is no information about the seventh detainee. It is known that Aleksandr Kozlyanko identifies as an anarchist, Andrei Marach – as an anti-racist, the political views of the rest of the arrested are unknown.

They were all charged with gross disorderly conduct (Article 342) and participation in the international criminal organisation Revolutionary Action (Article 285.2). The charges were based on the anarchists’ actions against the construction of a battery factory (blocking the Brest-Minsk highway) and the participation of anarchists in the march against the tax on unemployment in Brest in 2017. Interestingly, the march was then qualified as a mass event and some anarchists received an administrative arrest for it. For some reason, after four years, they decided to initiate criminal proceedings.

Some activists have concerns that Daniil Chul is incriminating other defendants.

According to the police, more than 15 anarchists from Brest and Minsk regions are in hiding in Ukraine and Poland.

Revolutionary Action has existed since 2005, previously it was a branch of Autonomous Action in Belarus. Their website states that RD is an anarchist organisation based in Belarus. The ideological platform of RD is anarcho-communism, social anarchism and illegalism. Among the most famous projects of the group is the website of Luka’s Gang http://bandaluki.info/, which collects information about law enforcers, judges and other people involved in repressions against Belarusians.