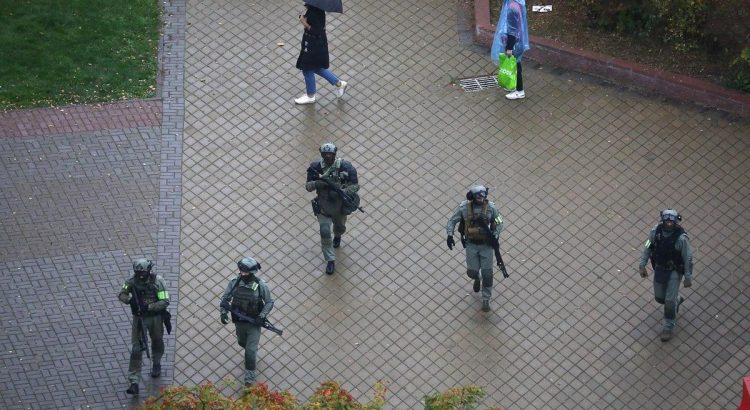 The crew of ABC-Belarus was so carried away by telegram that we forgot about the need to update the site. We are improving.

At the end of September it became known that a criminal case under Part 2 of Article 293 of the Criminal Code (participation in mass riots) is being conducted against 18-year-old anarchist Ivan Krasovsky. Ivan was detained in the evening of September 24. He was kept in a isolator and then transferred to a pre-trial detention facility. He was recognized as a political prisoner by human rights activists. Earlier, on August 12, he was detained at the railway station (with no connection to the actions, according to the orientation), tortured for 24 hours, as a result of which he was taken to hospital, Ivan spent two weeks in a wheelchair due to the consequences of torture.

On September 30 Baranovichi punk Pavel Pipko was taken away from work. Earlier a report about him was written in telegrams to the channel led by employees of GUBOPIK, allegedly he participated in one of Minsk marches in the block of anarchists, which is not true. He was also of interest during interrogation of two activists in Baranovichi. On October 2 Pasha was sentenced to 12 days in prison. Neither relatives nor friends were allowed to take part in court. It was not even known under which article of administrative code he was convicted. Last name of the judge was Kmita.

On October 2 in Minsk two participants of anarchist printing cooperative “Leaflet” were detained. Yevgeny Dyatkovsky was detained in the morning right in the salon and Konstantin Nesterovich was detained closer to lunch. Earlier they had already come to “Listovka” with an inspection and predicted that they were receiving complaints about printing banned materials. Later, another anarchist was detained near the cooperative. All three of them were tried on October 5. All were given 15 days of arrest, the guys did not admit guilt, the judge rejected all the petitions, although the guys had evidence that they had not participated in the actions they were accused of. They were accused of participation in marches on August 23 and September 23 respectively, allegedly they were identified by videotape. The cop witnesses had changed their names and were wearing masks. Witnesses to the defense were not allowed to take part.

On October 2 information about detention of anarchist Andrey Chepyuk appeared on the site of SC “Vesna”. After detention his apartment was searched in connection to mass riot case. On October 9 Andrey was charged under part 2 of article 293 of the Criminal code (participation in mass riots) and preventive measure in the form of taking into custody in pre-trial detention center #1 of Minsk.

On October 4 In Brest, the anti-fascists Roman Kochovich and Alexei Civicov were detained. Later Roman Kohovich was given 15 days, Lesha Civicov – 20 basic fines.

On October 6 in Minsk people in civilian clothes detained the activist of ecological movement Marina Dubina with the use of force and pepper spray. On October 7 a trial took place, Marina was not convicted, protocol was sent for revision but the girl was not released. Marina was accused of participation in the procession on August 23 although many evidences were presented that she was not even present in Minsk that day. On October 8 Marina Dubina was sentenced to 13 days of arrest.

On October 11 anarchist Masha Shakuro from group “Boston tea party” and team of rugby “Grazhdanochka” were detained. On October 12 she was sentenced to 10 days of arrest.

After somebody broke the window in the evening of October 12 in the building of Baranovich’s office of public prosecutor started a new attack on local active residents. Local anarchists and punks were among the first to be attacked. On October 13 six searches were conducted among anarchists who were earlier convicted for participation in protests in Baranovichi. Computers, phones, flash drives and other data carriers were seized from them. A collection of stickers and flyers and a watch were taken from one of the guys. On October 14 one person visited the police department for interrogation. Interrogation was carried out using polygraph. They asked about anarchists who called for radical actions, etc. On October 17 a guy who had been earlier convicted for participation in the action was taken to the police department on 23.08. He was interrogated and his phone was taken away. On October 18 a girl who had been searched earlier was summoned to the police department. She spent several hours waiting for the investigator but he did not show up.

On October 15 in the evening at work an anarchist Alexander Belov was detained. On October 16 he was given 15 days. The judge was a well-known Shabunya. During the trial they watched video from demonstration from an anarchist’s block with samba.

On October 20 anti-fascist and musician Igor Banzer was detained in Grodno. According to reports from “Viasna” Banzer may be charged with 342 articles of Criminal code of Belarus (organization and preparation of actions grossly violating public order or active participation in them up to 3 years of imprisonment).