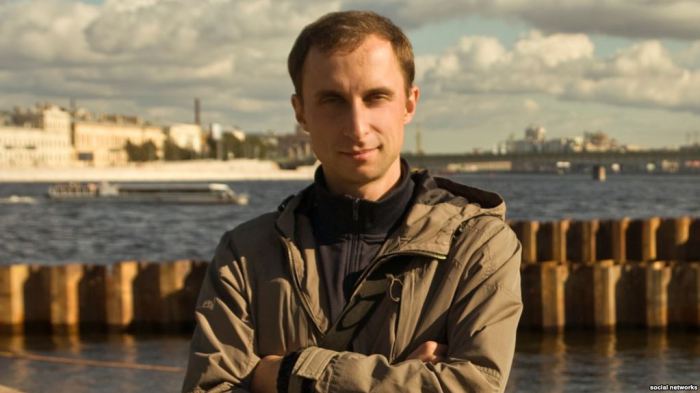 In an interview with Current Time TV, Bolotnaya Square defendant Dmitry Buchenkov said he has left Russia for a European Union country.

He said he has applied for political asylum in this country. Buchenkov failed to say exactly where he had gone.

“I’m calm about the fact I won’t be returning to the motherland soon. I won’t say leaving was easy. Psychologically, of course, I didn’t want to leave,” he noted. “The regime and the entire justice system forced me to take this step.”

He added he was currently not in touch with relatives.

When asked how he managed to cross the Russian border, the Bolotnaya Square defendant said he was “neither the first nor the last person to do it in such circumstances.”

According to Buchenkov, the Bolotnaya Square Case was “political” from the onset. He said that, after he was put under house arrest, “for six months [he] observed how the case was unfolding personally for [him]” and was convinced a guilty verdict lay in store. He said he was transferred from a pretrial detention facility to house arrest during a “brief thaw.” He was not outfitted with an electronic tracking bracelet, because the Naro-Fominsky division of the Federal Penitentiary Service had run out of them.

“I think the police investigators have long known they nabbed the wrong guy. But it was too late for them to back out,” said Buchenkov.

On the morning of November 9, Buchenkov did not show up to the Zamoskvorechye District Court for the latest hearing in his case, in which he stood accused of involvement in rioting. The Federal Penitentiary Service has accused him of fleeing, writes Current Time. Federal Penitentiary Service spokeswoman Natalya Bakharina said the defendant had “absconded,” since he was not to be found in his flat. She noted another family had been living there since November 5, and they were given keys to the flat in late October.

Buchenkov’s attorney Ilya Novikov wrote that he would refrain from commenting for the time being. In turn, Buchenkov’s other attorney, Svetlana Sidorkina, told RBC she did not know about her client’s departure from Russia.

“I don’t know about it. I do know he did not come to today’s hearing, during which the matter of whether to continue the forensic investigation or not was to have been ajudicated,” said Sidorkina.

According to her, the court decided to postpone the hearing since Buchenkov was not in attendance.

In April, at a hearing in the Zamoskvorechye District Court, Buchenkov declared himself not guilty of involvement in rioting and fighting with policemen. He was accused of violence against six Interiory Ministry officers and causing damage in the amount of 73,800 rubles to a commercial firm that set up porta-potties near Bolotnaya Square in Moscow.

Buchenkov, a 38-year-old anarchist and history teacher, was detained and remanded to custody in December 2015, thus becoming the thirty-fourth defendant in the Bolotnaya Square Case. Later, the Moscow City Court released him from custody and put him under house arrest. Buchenkov’s lawyers insisted the activist was not in Moscow during the events of May 6, 2012. The claim was corroborated by Buchenkov’s relatives in Nizhny Novgorod.

According to the defense, the police investigators who, allegedly, identified Buchenkov on video recordings of the May 6, 2012, protest rally mixed him up with another person. The defense lawyers sought to enter higher resolution photographs into evidence, but police investigators refused to take them into account.