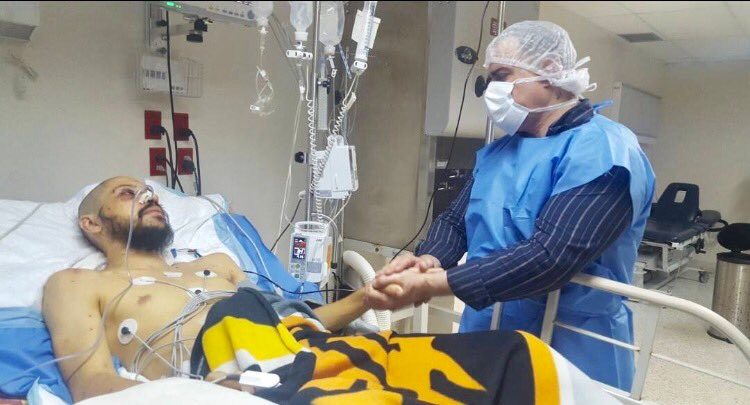 Gianni Scovino is a young man of 33 with Asperger’s syndrome and a member of the Turtle Foundation (Fundación La Tortuga [http://www.fundacionlatortuga.org/]), a participant in the punk scene, and an anarchist media activist using materials from El Libertario [Venezuela’s primary anarchist periodical] on his Youtube channel (https://www.youtube.com/channel/UCt5E7TuSaxrHPyoXF07LlZg/videos), where he puts up videos in both Spanish and English.

On July 13, he was savagely assaulted by members of the Bolivarian National Police (Policía Nacional Bolivariana [PNB]) and the Bolivarian National Guard (Guardia Nacional Bolivariana [GNB]) in the parking lot of the Grand Central Commercial Dairy Plaza (Centro Comercial Plaza Mayor de Lecherías) in the state of Anzoátegui while he was on a recycling run for the Turtle Foundation. A video of the attack is available on Youtube: https://www.youtube.com/watch?v=p5e5NDx7Ues

[Translator’s note: The Chávez regime and now its successor, the Maduro regime, refer to themselves as “Bolivarian,” in an attempt to paint themselves as the successors of Simon Bolivar, the leader of the 19th-century uprising against Spanish colonialism.]

After being brutally beaten by the PNB and GNB with nightsticks and with  shields used as battering rams, he was held for 36 hours at Detachment 521 of the Command of Zone 521 of the GNB, before being transferred to a medical facility for treatment. At present he’s recovering in the Hospital of the Venezuelan Institute of Social Insurance.

The violent assault suffered by Gianni is symptomatic of the constant violence in Venezuela for the last 100 days, in which, since April 1, more than 3,500 people have been detained, an incalculable number have been injured, and there have been police raids on civil and residential sites. Thus far 303 Venezuelan civilians have gone before military tribunals. And more than 100 people have been killed.

We’re making an international call to our overseas anarchist comrades for solidarity in the face of the attacks on the people of Venezuela during this uprising of the people. Silence is complicity with a dictatorship that oppresses, tortures, and jails anarchists.

With Gianni and all of the Venezuelans rising against the regime, we remain the anarchists in the popular uprising.