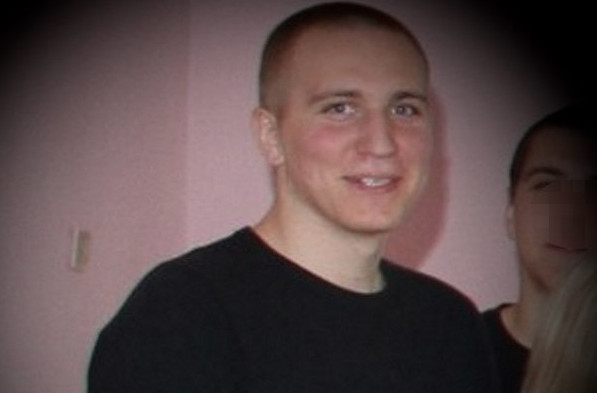 [French below]
Vadim Boyko is an antifascist supporter of FC Partyzan from Minsk. He was detained on March 22, 2016 together with other people on suspicion of participating in the attack on the right-wing hooligans that happened about two years ago. His trial is set for February 3, 2017 and we ask for financial support to pay the legal defense. The approximate cost of the legal aid for him is 5000 euros, part of which has already been covered by us.
Here is a full story.
FC Partyzan (former MTZ-RIPO) is an antiracist football club that doesn’t exist any more, while there are still some active groups of hooligans involved in street fights. As reported, on June 29, 2014 a mob of Partyzan supporters attacked a trolley-bus carrying a gang of right-wing hooligans of FC Torpedo. The attackers blocked the vehicle and broke a few windows. In the following days the police detained ten Partyzan fans on suspicion of the attack, but they were eventually set free with no charges. The case was frozen.
On March 22, 2016 cops carried out a series of searches in the flats of Partyzan supporters and detained a few people. As a result three of the detained – Ilya Volovik, Vadim Boyko and Dmitry Tsekhanovich – remained in custody with charges of aggravated hooliganism facing 10 years in jail. Later Dmitry was released with travel restrictions, the other two remain in custody.  At the moment there are 6 defendants to the case, including 2 former hooligans who were accused of selling drugs and allegedly testified against the others.

Meanwhile, the cops initiated another case against Ilya Volovik – leadership in an unregistered organisation, claiming that he was the leader of a hooligan gang. The case files count around 40 volumes and the trial is expected to be long.
It should be pointed out that antiracist football hooligans are not always close to anarchists in any ways. Part of them shares patriotic, homophobic, sexist tendencies, and we wouldn’t like to support such people. At the same time, we can’t close our eyes on the clearly political connotation of the case, since last year was rich in repressions against both left and right-wing groups, no matter how politicised they are. A lot of antifascists and right-wingers were put in jail on charges of possession of drugs, distribution of pornography (posts in social networks) and illegal business in addition to ordinary street conflicts with each other. The new charge of participation in an unregistered organisation testifies to this, too.
We call all of you having the possibility to offer financial support to do so. In this case we only support Vadim Boyko, since so far we didn’t get any information testifying that he is sharing openly partiotic, sexist or homophobic views, also he is trying his best not to cooperate with the law enforcement, unlike some other defendants including those mentioned above.
Our PayPal – belarus_abc@riseup.net
Bitcoin – 1CcxWEswKjXZgXQCds5KcHfemzrAASVbuv
European Bank account:
Account Holder: VpKK e.V.
IBAN: DE 4085 0205 0000 0361 5700
BIC: BFSWDE33DRE
Bank für Sozialwirtschaft
Note: Donation ABC-B
Please make the Note as stated above!
French version of the call