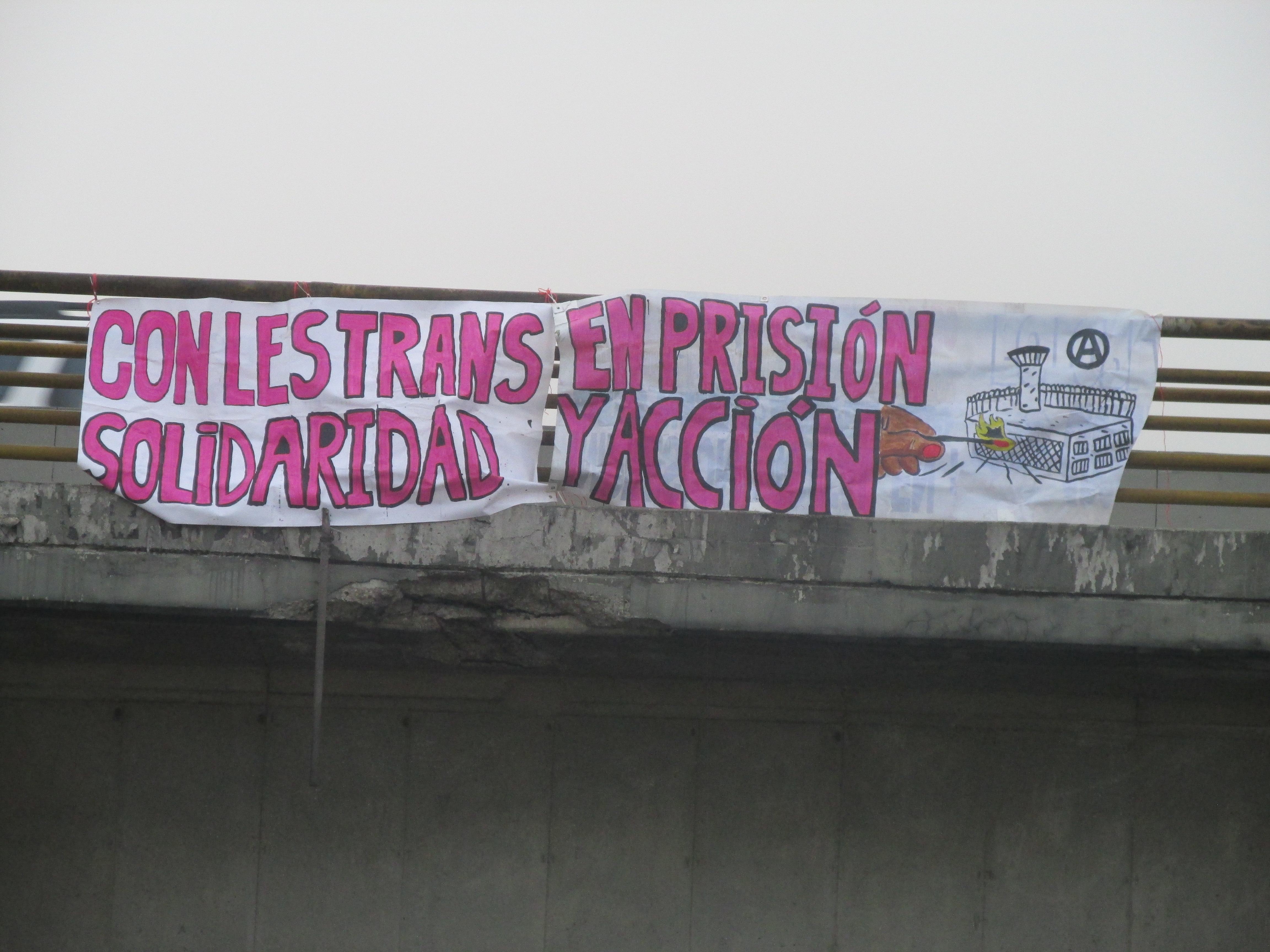 Today we have returned to the same streets where we have experienced harassment, teasing, assaults.
With our heads on high and the confidence that gives us the support from the people next to us, we forget about the fear for a while, and focus in the pleasure of communicating through action, claiming the territories where we have been banned from.
The whisper of the spray can indicates that there is no way back, the darkness harbors us, and we are covered with a mantle of indecipherable stars in a contaminated sky, unmistakable gift from the industrial capitalism.
We want to say a lot, and is so complicated that our words arrive where they are destined, but we appeal to these streets as another tool to break the incommunication that the confinement wants to impose, although we know that is not enough.
We join the January’s 22nd initiative (trans prisoner day of action and solidarity) originated in the US, acknowledging the transphobia and a number of practices that exclude specially trans prisoners, in Colombia too.
In a system where heteronormativity is the rule, and pretends that the only way to exist as a human being will be under the categories of “women and men”, any individual outside this postulate knows methodical exclusion. Making it easy pointing out the transgressions starred by persons who disobey gender norms, while ignoring the oppressions that they have faced, and the ones they currently face.
At the same time, is important to highlight that the social stigma that weighs on prisoners and ex-prisoners, is part of the same strategy of enemy used to talk about “terrorists”, that aims to justify the security, surveillance and the wars of the power and the capital. Also, the prison’s existence evidence that the standardization devices used by the society are ineffective, that there will always be disobedience, either because of people who reach marginality places, where they have to break the law to survive and aspire to a less precarious life, or because their will invite them to attack the existent.
Trans prisoners in Colombia face enormous challenges, risk of potential sexual assault and STD contagion, -especially in men’s prisons-, forbidding of intimate visits (that persists in some jails), inefficacy and low celerity present in their legal processes, arbitrary interruption of hormonal treatments, abusive confiscation of cosmetics, discrimination in medical attention, restricted access to condoms. Not to mention that when trans women are visiting and not being visited, they can be humiliated with vexatious searches, forced to visit the day that corresponds to men, etc., which contributes to breaking the trans prisoners social fabric, thus condemned to a greater isolation.
With this panorama, the answer from trans community, inside and outside prison, it has been self-organization. Through this, it has achieved important victories after legal and institutional pressure, but following the words of Emilie Räkete, “”
So that we are just another expression that wants to remind trans prisoners that they are not alone, and invite people (trans or not) to take action, and find in mutual aid, respect, affection and reciprocity, the most effective weapons to imagine and construct a freer world, with less barriers.
In the official cyphers of INPEC (prison and penitentiary national institution, by the acronym in Spanish), for 2014, there were 102 transgender persons in Colombian jails. Maybe there are more, and we admit it, we are ignorant of may of those histories and herstories.That’s why we seek to promote in large and small, the initiatives that invite to practice effective solidarity with this marginalized population, and from the margins (why not?), from the cracks of the power and the system, weaving relationships and projects tending at dismantling prison, transphobic and heteropatriarchal society.
We’ll be back on the streets when necessary, in these ones, or other ones, sooner, or not that soon. Anger is a gift and we recieve it joyfully, eager to share it when needed.
In memoriam:
Paola
Shania Vanessa
Alex Camel
Angelina
Zharick
Marcela
Valentina
Valeria
Juliana Andrea de Henao Pérez
Paloma
Flor
Kyara
*Some names of trans persons killed in different towns and cities in Colombia
Death to transphobia!
Year 525 of the Resistance.
*In the pictures, “With trans in prison, solidarity and action”