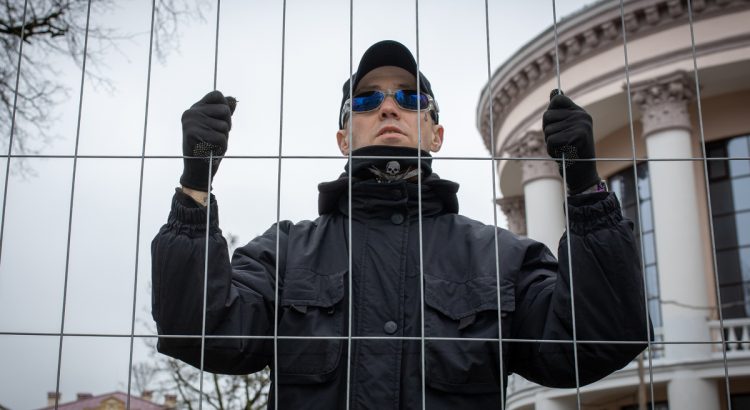 On 6 October the office of the Prosecutor General declared that the case of anarchist partisans was transferred to the court, and published details of the case. According to the version of the prosecution, on 10 October 2020 Ihar Alinevich and Dzmitry Dubovski crossed Belarusian border from Ukrainian side. On 21 October 2020 Alinevich, Dubovski, Sergey Romanov and Dzmitry Rezanovich set on fire four cars on the parking lot of the Salihorsk district prosecutor’s office, as well as one room of the building of Salihorsk branch of the State Committee for Forensic Expertise. On 28 October 2020 in Mazyr they set on fire the building of the road police of Mazyr district. The group possessed two pistols, one sawn-off gun, one grenade and cartridges. Group participants were detained by frontier-guards near Bahucičy village of Jelsk district, close to Ukrainian border.
All four are accused in the illegal possession of arms and acts of terrorism; terrorism accusations can result in up to 20 years of imprisonment.

On 25 October it became known that on 11 October Mikita Yemelyanau had been placed into the isolation cell for 10 days, and on 20 October his isolation had been prolonged for 10 more days. On 11 October Mikita declared a hunger strike to protest the fact that a meeting with a Catholic priest is denied to him. He had wrote application for such meeting back in summer. Additionally, letters of friends do not arrive to Mikita.

On 26 October Sergey Romanov was transferred to the detention unit nr. 3 (in Homiel). On 29 October the court of Čyhunačny (Railroad) district of Homiel (judge Aleksej Khlyshchenkov) considered the criminal case against Sergey. The anarchist was accused in defying the measures of preventive surveillance (article 421 of the Criminal Code). He had been placed under preventive surveillance after serving his first prison term (5 years) for illegal possession of explosives. Alleged misconduct was minor, e.g. visiting a bar where alcohol was served (but not drinking any alcohol there) or being present at the staircase of his apartment house at night (while it was strictly forbidden to leave the apartment at nighttime). The sentence was declared on 1 November: 1 year of the penal colony (maximum possible for such kind of ‘crime’). More details: https://abc-belarus.org/?p=14417&lang=en

At the end of October Artem Solovey‘s term in custody was prolonged for 3 more months – until 4 January 2022.

On 29 October Igor Bancer (pictured) was transferred from a detention unit back into the ‘open’ correctional facility nr. 9 in Viciebsk (so-called ‘chemistry’) after successful appeal against previous court decision, sentencing him to a transfer into a penal colony for alleged ‘violations of the order’ in the ‘open’ correctional facility nr. 9. ‘Violations’, allegedly committed by Bancer, had been documented before changes in laws came into effect. Even under its ridiculous laws, this state should not have tried Igor at all. But Igor was tried and sentenced.
New old address:
IUOT-9, vul. 3-ja Čepinskaja 39, Viciebsk, 210034, Belarus
Bantser Igor Romanovich

During October, at least 95 more people were convicted in politically motivated criminal trials in Belarus.
As of late October, 831 persons were declared political prisoners by human rights organisations.
In late October, a joint statement was produced by a number of political initiatives and organisations, suggesting that criteria of recognition a person as a political prisoner should be applied more widely
(https://stopdictat.tk/en/articles/o-chrezvychainoi-politicheskoi-situacii-v-belarusi-i-chisle-politicheskih-zakluchennyh). According to estimations of authors of the statement, there were 1021 political prisoners and 287 more subjected to politically motivated persecution (e.g. people sentenced to restraint of freedom without assignment to correctional facility). ABC Belarus co-signed the statement, although with reservations and criticism (we suggest that criteria have to be even wider).

Human rights defenders and journalists are two groups severely affected by state repression. Authorities aim to wipe out all independent journalists away from the country, and to large extent they succeed. Many of the remaining ones have to work clandestinely. Almost all independent online media outlets are blocked inside Belarus (it is possible to read them only using Tor or VPN), and all independent newspapers stopped their existence in print. More and more media outlets and telegram channels are included into official list of ‘extremist’ materials (all anarchist websites are there for several years already), meaning that it is forbidden to cite them even in a private correspondence and especially in one’s social networks.
Authorities continued to close down NGOs in October. It seems that by the end of the year no independent NGOs will exist in the country – only such which closely cooperate with authorities.

Police officers continue to organize special operations, breaking into houses and apartments in search of protest symbols and detaining people at work; they conduct daily searches and interrogations.

Authorities continue to annul licenses of lawyers who dare to defend people in political trials.

At the Belarusian-Polish and Belarusian-Lithuanian border, a refugee crisis is ongoing since summer. Belarusian authorities let migrants from various Asian and African countries (a prominent country of origin is Iraq) to enter Belarus through official channels and then to cross Polish or Lithuanian border clandestinely (in the past, such migrants were stopped by Belarusian side in most cases). Polish and Lithuanian frontier-guards, assisted by Frontex agents and German police, practice massive push-backs (fast track illegal deportations), but then Belarusian frontier-guards push migrants back to Polish side. Both Polish and Belarusian frontier-guards brutally mistreat migrants, beating and robbing them, and leaving them in the cold forests and swamps without medical assistance and even food and water. Several deaths were already officially reported, and the general feeling is that fatalities and casualties are underreported. The situation reminds a refugee crisis on the border between Turkey and Greece in February and March 2020 (it seems that Lukashenka borrowed an idea from Erdogan).

It seems that protests are completely over.

A strike was announced by a group of emigre shop-floor activists. The plan was to start the strike on 1 November. It had to be an ‘Italian’ strike (slowing down of work, work according to official norms, taking days off for health reasons etc).
It is hard to perceive how many people actually joined this strike. But, as really many people are ill right now (because of covid-19), at some smaller enterprises up to a half of workforce is away for health reasons.