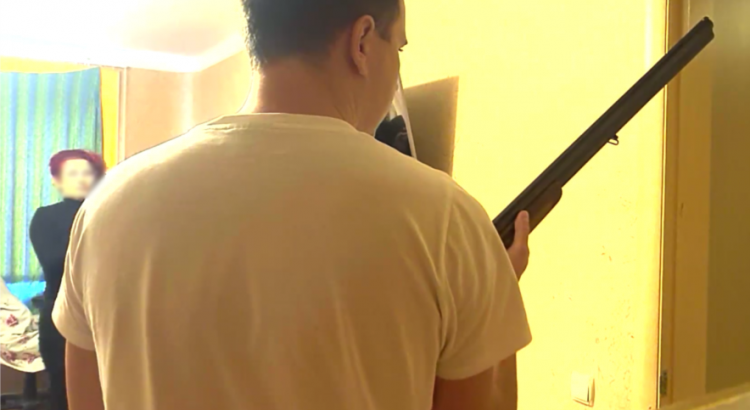 Updates on anarchists and antifascists

Tamaz Pipiya was transported to Žodzina detention centre. His new address:
Tamaz Pipiya
ST-8, vul. Savieckaja 22А, Žodzina, 222163, Belarus
At the end of September Tamaz fell ill, had difficulties with breathing, but received no medical assistance whatsoever. He is continuously held in ordinary cell with other (nominally healthy) prisoners. During a meeting with relatives he looked very ill.

An appeal court hearing in case of antifascists Timur and Tamaz Pipiya, Denis Boltuts’ and Vitaly Shishlov took place. Their sentences were left unchanged, save for Timur: his sentence became 1 month shorter, as his conviction in non-paying of ailments (art. 419 of the Criminal Code) was removed. Final sentences: Timur Pipiya – 6 years, 2 months, 2 days of incarceration; Tamaz Pipiya – 5 years; Denis Boltuts’ and Vitaly Shishlov – 6 years each.

Mikita Yemelyanau had spent more than 40 days in a punishment isolation cell, and was deprived of a meeting with relatives. An anarchist wants to make a written demand to be held in a single cell, but prison guards do not let him to do it.

Igor Bancer was released from a punishment isolation cell where he had spent 40 days for alleged minor violations of prison rules (e.g. not staying in bed during official sleep hours). During last 19 days of an isolation, he was on hunger strike. He felt himself badly, was unable to stop the hunger strike without assistance, and demanded hospitalisation.
Later Igor was sentenced to the substitution of an open prison (so-called ‘chemistry’) sentence with 1 year and 25 days in a penal colony (closed prison).

Antifascist Andrei Kazimirov will stay in Russian detention centre until 15 January 2022 (while his case will be considered further), according to the decision of the European Court of Human Rights which ruled that there is a real risk to his life and health in Belarus. Andrei’s extradiction is so far postponed.

During September, at least 103 people were convicted in politically motivated criminal trials in Belarus.
As of late September, 715 persons were declared political prisoners by human rights organisations. Anti-prison activists assume that real number of political prisoners is no smaller than 1200, and the number continues to increase rapidly. According to authorities, criminal cases are predominantly situated in the capital, Minsk, and in western Brest and Hrodna regions.
On 6 September, the Minsk Regional Court passed a verdict in the trial of prominent liberal activists Maryia Kalesnikava and Maksim Znak, and sentenced them, respectively, to 11 and 10 years in prison.

Human rights defenders and journalists are two groups severely affected by state repression. Authorities aim to wipe out all independent journalists away from the country, and to large extent they succeed. Many of the remaining ones have to work clandestinely. Most independent online media outlets are blocked inside Belarus (it is possible to read them only using Tor or VPN), and all independent newspapers stopped their existence in print. More and more media outlets and telegram channels are included into official list of ‘extremist’ materials (all anarchist websites are there for several years already), meaning that it is forbidden to cite them even in a private correspondence and especially in one’s social networks.
Authorities closed several dozen NGOs in September. It seems that by the end of the year no independent NGOs will exist in the country – only such which closely cooperate with authorities.

There were reports in September on especially cruel torture of people (including women) under administrative arrest on political charges. Such arrests are relatively short-term (15 to 60 days), but mistreatment is so cruel that people who passed through the tortures need several months to recover from illnesses acquired in prison.

Police officers continue to organize special operations, mostly in Minsk, breaking into houses and apartments in search of protest symbols and detaining people at work; they conduct daily searches and interrogations.

Authorities continue to annul licences of lawyes who dare to defend people in political trials.

There are scattered isolated protests here and there (like hanging of flags or banners, small ‘spontaneous’ demos, graffiti, distribution of leaflets and information materials).

The most important episode of the month took place in Minsk on 28 September. KGB special forces in plain clothes stormed an apartment of an IT specialist Andrei Zeltser (pictured). They failed to introduce themselves or to show an order from a prosecutor to perform a search. After calling police for assistance against robbers, Zeltser opened fire and mortally wounded one KGB officer, but was killed himself. His wife Maria Uspenskaya, who was present at the scene unarmed, was taken hostage. Currently she is accused of participation in a murder, although there are no indications that she was involved in armed resistance. Authorities are now using the case to justify more indiscriminate house raids.