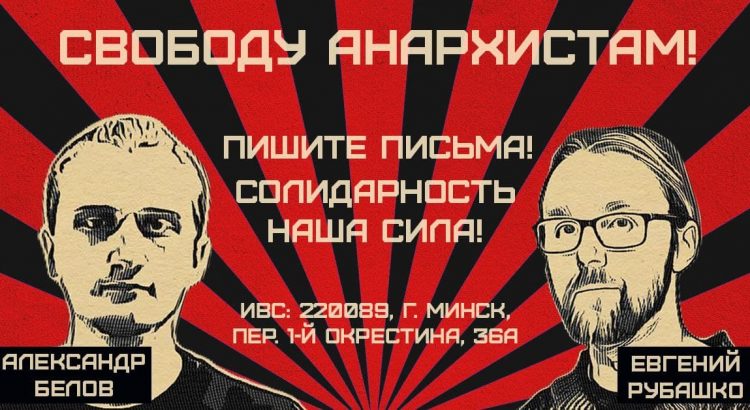 It’s been almost a year since the beginning of the protests in Belarus caused by falsified elections. A lot of our comrades have been put behind bars, many had to flee the country, public activity is hampered not only for anarchists, but for all dissident associations and groups. Below you will see a short update on the situation with the repressions in Belarus with a focus on anarchists and antifascists. We will try to release these updates at the end of each month.

Four Minsk antifascists were convicted on July 2. They were accused of participating in mass riots and attacking plain-clothed police.

Three of them reported that violence and torture was used on them to extort confessions. Vitaly Shishlov and Denis Boltut got 6 years or imprisonment, Timur Pipiya – 6 years and 3 months, Tamaz Pipiya – 5 years of prison.

The trial of anarchist blogger Mikola Dziadok started on June 29. He is accused of gross violation of public order, calls to the change of the regime via internet and possession of Molotov cocktails (he claims they were planted during the search). In a hearing, Mikola gave a detailed account of the torture and violence that were used on him during detention to extort passwords to encrypted devices. The trial is paused now, because a new expert review has been requested by the defense. It will look into Mikola’s blog posts for extremism calls, but the prosecution asked to analyse them for inciting social hatred to cops – this may result in a new case against Mikola.

The Kiev court of appeal upheld a complaint filed by Belarusian anarchist Aleksei Bolenkov and overturned the secret service’s decision to expel him from Ukraine. A similar order was also issued to Belarusian anarchist Artur Kondratovich from Ivatsevichy, who left for Ukraine because of persecution in the big-board arson case. But Kondratovich is under the international protection of the UN, so they cannot expel him. On the day of the trial, a group of far-right activists who advocated Bolenkov’s deportation gathered outside the court building and tried to attack him. A journalist from a local publication was injured. The scuffle also took place in the metro.

An anarchist sympathiser Vladislav Bokhan had his home searched last week under a mass riots case. After the search, he was detained and and questioned by the political police. They asked him questions about the events of August-September 2020, about rallies, marches, and about anarchists. Afterwards, he was taken to the police department and threatened with the arrest of his wife and forced to sign a report of disobedience to police, but was released pending trial. Fearing for his safety and that of his wife and children, Bohan decided to leave the country.

Brest anti-fascist Andrei Kazimirov will be extradited to Belarus, despite the ban of the European Court of Human Rights. The court has recently banned the extradition of Kazimirov until his case is heard on the merits, as he may face ill-treatment and torture in Belarus. However, on 29 July, a Moscow court decided to extradite Kazimirov at the request of the Belarusian authorities.

On 29 July the anarchists Yauhen Rubashka and Aliaksandr Bialou were detained in Minsk. Yauhen was detained at about 7 a.m. in the flat where he lived with his neighbour. Both of them reported beatings and tortures including suffocation by a plastic bag. The neighbour was later arrested for 14 days for disobedience to police. Yauhen Rubashka was forced to give up the passwords to his equipment under torture. It is known that Rubashka and Bialou were later interrogated in the Investigative Committee under Article 342 of the Criminal Code and detained as suspects of organizing actions that grossly violate public order. Apparently, Bialou’s flat was also searched. They are in the temporary detention facility.

Two more anarchist reported searched in their flats on the same day. They were not at home, so their relatives got a portion of harassment.

In July, they repressed all independent media, human rights defenders, and NGOs. Some people got in jail, many fled the country. Most NGOs are banned now, media websites are blocked in the country.

Our list of incarcerated and persecuted protesters amounts to 1000 people. International reaction to Lukashenko hijacking a Ryanair airplane to arrest a wanted journalist and his partner followed in the form of sanctions and flight ban to an from Belarus. For the moment, flying out of the country is next to impossible. Due to coronavirus restrictions, Belarusians are not allowed to leave the country by land (with the exception of a number of reasons like work, study, illness, etc.). Now good transport connections are open only with Russia.

The trials of important and ‘dangerous to the regime’ politicians are closed for public. Recently, an ex presidential candidate was sentenced to 14 years in prison, others are tried at the moment.

At the same time, after the sanctions were imposed, Lukashenko started playing the same game as usual, offering some political prisoners to write a petition for pardon.

New amendments to the Criminal Code were passed that changed the rules of counting days in pre-trial detention in the prison term. Now one day in a pre-trial detention counts as 1.5 days of imprisonment in a penitentiary and 2 days in an open-type correctional facility.

107 people were convicted on political charges in July alone.