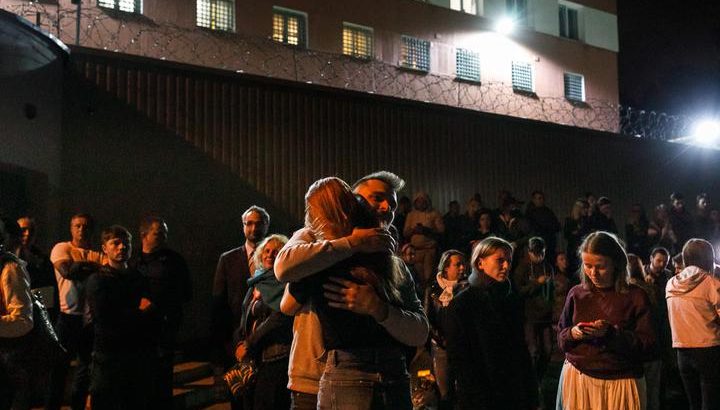 Anja is 19 years old, when she sees her mother among those waiting, she rushes into her arms, and for a long time they stand silently, with tears in their eyes. The women was detained on August 12 near her home in the shopping center “Riga”. A riot police officer grabbed Anja as she was returning home. She saw a column of trucks ahead of her and decided to wait for them to pass.

According to Anja, on the first day they didn´t get food at all. Then they were given water and some bread, that’s all. She confirms, like many others, that men were beaten at night.

Anja was tried directly at the prison, she doesn’t remember the judge’s name.

Every day parents looked for their daughter in Okresin, went to the isolation ward Zhodino. Everything that the police could say in a day: Anja was detained, but where – such information was not provided to relatives.

On Thursday night, the women who were in Anja’s cell were taken out and it was said, “something needs to be reviewed”. The woman told her she had been detained, and at 20.30 she was allowed to call her family. That’s how the family ended up in Okrestin. After hugging Anja, her parents put her in a car and took her home.

“They were beating me and ask what I don’t like about the country.”

If before one o’clock in the morning men were released three or four times, then after that they began to go out in small groups. One had no sleeve on his shirt, the other had a bruise under his eye. The guy, looking like 16-18 years old, looks confused, no one close to him at Okrestin, a volunteer immediately runs up to him and stretches out the phone. He makes a call. He refuses the offer to talk at once. Like many adult men.

Many people don’t want to talk about violence, they’re scared. And if you know the details of all humiliation, this behavior is understandable. Men were beaten, threatened with criminal cases, mocked and abused. Two friends who wouldn’t like to appear in the media and show their faces, but are ready to show the stun gun marks and beatings, say, “they were beaten”.

How long the beating lasted, the friends can’t say for sure: “They beat you until you are done.” Six people were beaten up. Later, in the isolation ward, the friends saw the protocol. According to the young people, many had the same formulation. They refused to sign it. But they were forced to sign the document: if they take part in the action again – it’s already a criminal case.

Vadim, 32 years old. He is one of those who left the prison building after 1 a.m., although time in this place seems to be no longer of any use. When we meet him, he is already sitting at the gates of the prison on the curb surrounded by volunteers and someone else’s family. With thin long fingers, the young man holds a glass of warm tea. Later he will tell us that he was detained on the night of August 9-10. He ate nothing until the night of 13-14. The guy didn’t go on hunger strike, he refused to eat. He wanted to get sick and have an ambulance take him out of the prison. But his body was able to take it.

Vadim wants to talk to the journalists himself, he wants to, but he’s very afraid. Many people who leave the building are afraid to communicate. “It’s better not to”, “I would love to, but I can’t” – my colleague and I hear such answers over and over again. “Why not?”, “Who forbid to talk?” – we specify, in return – silence, tired eyes and once – a smile.

We’re going a few meters away. Vadim says they detained him on the street while he and his friends were walking.

In 17 minutes of the interview, he will feel like he’s being followed more than once.

According to Vadim, any demands in the prison were met with aggression and physical violence.

Life in the cell, continues Vadim, can be described in four words: “just sit and wait. Because it’s full, “you can’t sleep or lie down.”

He refused. Said he wanted to stay outside the prison building with the people standing here.