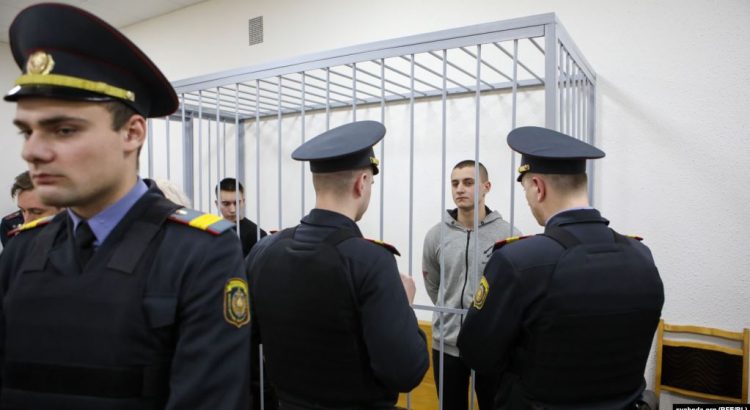 On February 12, 2020, Mikita Yemelyanau and Ivan Komar were found guilty of intentional destruction of property on several accounts.

Activists were detained on October 20, 2019, just after an attack with a Molotov cocktail on the pre-trial detention facility in Minsk made in solidarity with another anarchist Dzmitry Paliyenka (who was kept there at the time) and other political prisoners in Belarus. From day one, Ivan Komar made a statement of Mikita Yemelyanau being guilty in it. He also talked about two other attacks – one similar attempt to attack the same pre-trial facility when Molotov didn’t start burning and an attack with light bulbs on the Minstk City Court as a protest against the judge who decided to hold a closed court hearing of Paliyenka’s case.

Mikita Emelyanau refused to make any statement, but some time later he talked to cops informally and confirmed his involvement in the attacks.

Although Mikita said in court he planned the attacks alone and Ivan Komar didn’t know about them and was just asked to film his action, they were considered as a group and both were sentenced to 7 years of prison. The total damage made to both buildings amounts at 70 euros.

Independent journalists and photographers initiated an open letter in support of the activists.

ABC-Belarus refused to support Ivan Komar for his collaboration with the police. You can support Mikita Yemelyanau here.