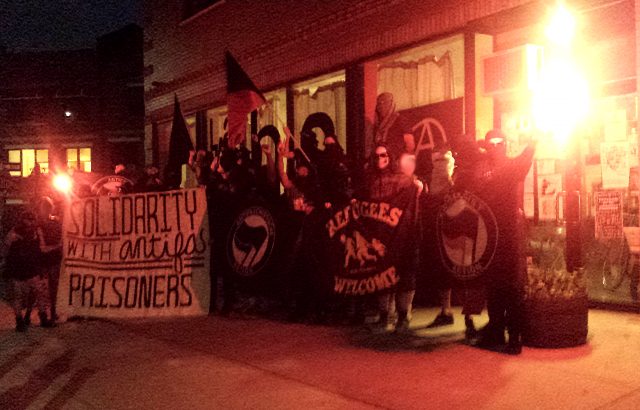 As the third annual July 25th International Day of Solidarity with Antifascist Prisoners approaches, we find ourselves fighting the hydra of fascism and far-right ideology. While its many heads have distinct looks in different parts of the world, this beast spews the same venomous poison of nationalism and bigotry everywhere. It demonizes refugees and immigrants, stokes hatred for Muslims, and attacks LGBTQ and other oppressed groups who are fighting for liberation and their very lives.

The July 25 International Day of Solidarity with Antifascist Prisoners originated in 2014 as the Day of Solidarity with Jock Palfreeman, an Australian man serving a 20-year sentence in Bulgaria for defending two Romani men being attacked by fascist football hooligans. Whether acting as individuals or as part of larger organized demonstrations, this is the kind of bravery and solidarity which defines antifascist actions against the forces of hate. Since the day of solidarity last year, we have seen this spirit all over the world—in Indonesia, Czech Republic, Brazil, Poland, England, Greece, the United States, France, Syria, Australia, Japan and all points in between.

While antifascism is global, unfortunately so is state repression. In the U.S., hundreds of antifa have been arrested resisting both the Trump regime as well as Far Right street forces. In Belarus, the state continues to harshly repress the antifascist resistance. While many of these comrades are awaiting sentences, there are still many who languish in prison. We will not forget these comrades behind the prison walls!

We call on anti-fascists worldwide to act in solidarity with antifascist prisoners. Consider having an event or dedicating an action to them. They are in there for us, and we are out here for them!

No Pasaran!
Until All Are Free!

The call is now available in German, Greek, and French.
Translations are forthcoming in Spanish, French, Finnish, Swedish, and other languages.
Contact us if you can translate it into another language!

Below is a list of global antifascist prisoners who have been sentenced. Hundreds more have been arrested but have not been convicted; we encourage local groups to support the antifascists of their choosing who are in legal trouble. If you are not donating to a specific person, a good option is to support the International Anti-Fascist Defence Fund.

Please contact us: if you know an antifa prisoner who is missing form the list (include their details, and what languages they can read); if you can help translate the call; or if you are planning an event that, so that we can help publicize it: nycantifa@riseup.net.

Roman Bogdan was arrested on April 15, 2015, as part of the long-going state repression of anti-fascists in Brest, stemming from a fight between anti-fascists and fascists on May 8, 2013. In October, Roman was sentenced to 8 years in a penal colony and must pay 3500 Euro in damages. On December 15, 2015 a regional appellate court commuted his sentence by 2 years.

Vlad Lenko is an antifascist from Ivatsevichi (Brest region). He was arrested on December 27, 2014, and accused of taking part in a fight against local neo-Nazis earlier in December. Vlad was charged with group hooliganism and aggravated bodily harm, and in September 2015 was sentenced to 6 years in a penal colony.

Supporters are trying to raise money to appeal the verdict, which they hope will reduce his sentence by half. They also need to collect 1000 Euro to pay damages ordered by the court.

Maxim Yahnieshka was arrested after a fight on April 1st, 2015, where he was hospitalized in a fight with right-wing hooligans. Cops were called by hospital staff, and Maxim refused to name his attackers to police. After obtaining surveillance camera footage, the police identified the right-wing hooligans and had them accuse Maxim of prior conflicts. On September 7, 2016 he was sentenced to 3 years of custodial restraint for malicious bodily harm, theft of a hat, property destruction, and threatening to kill right-wing hooligans. Appeals to a higher court in November left his sentence unchanged, and on December 12, 2016 he was transferred to an open-type penitentiary institution.

Jock Palfreeman is an Australian anti-fascist political prisoner serving a twenty-year prison sentence in Bulgaria for the rather mysterious death of a neo-Nazi football hooligan who was part of a group attacking two Romani men in Sofia, Bulgaria in 2007. Jock came to the aid of the Romani, and quickly found himself the focus of the attack. Bulgarian authorities did everything they could to ensure that Jock did not receive a fair trial, and after his sentencing have refused–in contravention of their own treaties–to transfer him to Australia to serve the rest of his time closer to his family.

Jock recently wrote that, “Although I do not want people to forget that I continue to stay incarcerated for defending a Roma man being brutally beaten by 15 neo-nazis, this July 25th 2017 I request that as many people as possible can organize solidarity funds for our prisoners’ union here, the Bulgarian Prisoners’ Association (BPRA).” He also asks that people write  to government officials and request that they meet with BPRA representatives.

He can read English and Bulgarian.

Aleksandr  Kolchenko was arrested in Crimea on May 17, 2014, along with several others, and accused by Russian authorities of participation in a “terrorist group” which planned explosions near the Eternal Fire memorial and the Lenin monument in Simferopol, as well as having sabotaged railway tracks and electricity lines. Aleksandr is also alleged to have carried out two arson attacks in April: against the headquarters of the Russian Unity-Party, and the Russian Community of Crimea. He was transferred to Moscow and is being kept in draconian conditions. His lawyers are under a gag order, and have been refused elementary rights to defend him. He faces fifteen-to-twenty years in a labor camp.

Russian authorities claim that Aleksandr is a member of Right Sektor, a Ukrainian ultra-right nationalist organization, but he has no connection to the group—a fact confirmed by relatives and friends. Moreover, Aleksandr is an antifascist and anarchist who consistently opposed nationalistic movements in Crimea and faced constant fascist attacks for his activism. For example, after a film screening about murdered anti-fascist journalist Anastasiya Baburova, he was attacked by thirty Nazis with knives.

Since this case is highly political, Aleksandr’s legal costs are high, around 850 euro per month. The investigation has created a heavy financial strain on local ABC groups, and there is a call for financial support and information distribution. You can make donations via PayPal to abc-msk@riseup.net or using a bank account (write to the same e-mail address for details).

Please note: Moscow ABC advises that letters in English are seldom accepted in Russian prisons, so please write only in Russian (try using a translation program), or just send photos and postcards.

Joel Almgren was sentenced to five years and six months for defending a local community-organized anti-racist demonstration in Stockholm against a brutal Nazi attack on December 15, 2013. The peaceful protest—against fascist assaults on local anti-racists and the dissemination of Nazi propaganda in area schools—was attacked with knives, sticks, and glass bottles by the most militant Nazi group in Sweden. Anti-fascists at the scene defended the demonstration from the attack and many were injured themselves.

Joel has over 4080 USD in fines, and his supporters are asking for help raising the money.

He can read Swedish and English.