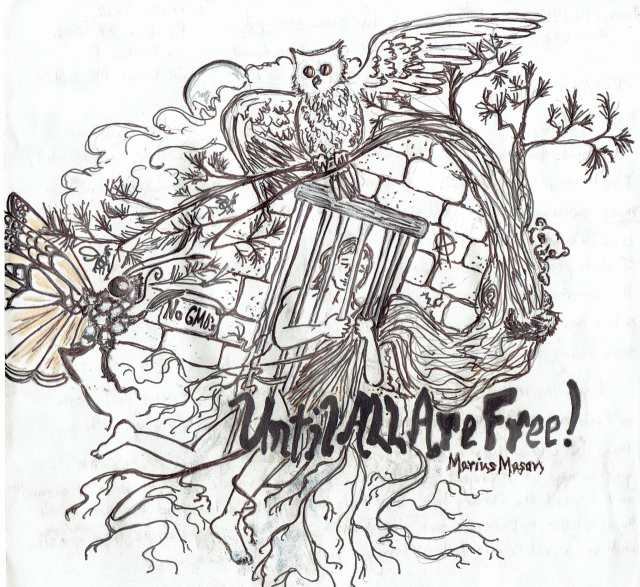 ‘If fighting for freedom is a crime, innocence is really the worst of all’

In late 2008, a midst diffuse hostilities triggered by the revolt in Greece following the assassination of Alexis by police, the Belgian Federal Prosecutor launches an investigation of anarchists and anti-authoritarians. In 2010, on the basis of a list of actions that the police attribute to the “anarchist movement” and while the struggle against the construction of a new detention centre in Steenokkerzeel is underway, magistrate Isabelle Panou is assigned to the investigation, now under the anti-terrorism. In May, then in September 2013, a dozen searches took place within this investigation, the searches targeting different homes as well as the anarchist library Acrata in Brussels. It is on this occasion that the existence of an antiterrorist investigation first emerges. This investigation is led by the anti-terrorist branch of the Federal Judicial Police backed by the State Security and the General Intelligence and Security Agency of the army as well as various anti-terrorist branches of other European countries.

The investigation is closed in 2014, culminating in the referral of twelve anarchists and anti-authoritarians to the Court Chambers.

After a session for the legalization of the specific methods of research used in this investigation (shadowing, phone tapping, microphone placement in one house, secret searches, attempts at infiltration, placement of video surveillance devices outside homes and inside one home) in October 2015, the case is referred to the Court Chamber. The sitting of the Chamber is scheduled for May 10, 2016 and will determine whether a trial should be held, and if so, under what charges.

In this investigation, the Federal Prosecutor has attempted to draw up no less than 29 individualized charges. Nine comrades are accused of belonging to a terrorist organization and involvement in terrorist activities for more or less extended periods. Three of them are also accused of being the “leaders”. In addition, three other people arrested in the wake of an attack on the police station of Marolles are accused of belonging to this terrorist group for a day, as well as various charges related to the attack. This is as far as concerns the general accusation.

This is then complemented by more specific charges such as participation in a non-authorisation demonstration outside the detention centre 127bis in Steenokkerzeel (transformed into “attempted arson” and a “terrorist offence” by the prosecutors), preparation and participation in an attack on the police station in Marolles (qualified by the prosecution as a “terrorist offence”), assault and wounding of police officers on several occasions, obstruction of the public highway, damage in various forms, shoplifting, arson of prison guards’ cars in the Ittre prison car park, incitement to commit terrorist offences… It should be noted that these specific allegations are each aimed at specific comrades, that is to say not everyone has been charged with all the allegations.

The backdrop to this investigation that has gone on for several years and produced no fewer than 32 boxes of papers, is that the Federal Prosecutor hypothesizes that an “anarchist terrorist group” would be active, in particular in Brussels, and that the accused would have “participated” in or “favoured” those activities. For example it has produced a list of about 150 attacks, a good number of which incendiary, against the structures of domination, police stations, courts, banks, companies that enrich themselves out of incarceration, construction sites, cars of diplomats, Eurocrats and NATO officials, mobile phone antennas… All these attacks took place in Brussels and surrounding area between 2008 and 2013.

The invention of a terrorist group that would be responsible for all of these facts (if only by the fact of “having rendered them possible”) allows pretty pirouettes for the prosecution: a library becomes a place of recruitment, discussions become clandestine meetings, leaflets and newspapers of anarchist critique become urban guerrilla manuals, demos and rallies become calls to terrorism, the affinity ties between people in struggle and the self-organization that might flow from them become “a structured terrorist group.” The invention of an “anarchist terrorist group ” is obviously a rather clumsy attempt by the State to reduce anti-authoritarian and revolutionary subversion to the work of a single “structured group”. In trying to put a handful of inconvenient anarchists behind bars the State is seeking to discourage the refractory from taking direct action against what oppresses and exploits us and impose absolute silence on any desires, possibilities and critical reflections that clash with this authoritarian world.

What has been committed to trial therefore is a mosaic of struggles, revolts, ideas, direct actions, critique, revolutionary imaginaries, agitations that have been attempting to attack dominion for years. In this, the possible trial concerns not only the comrades accused, but also each individual, every anarchist, every revolutionary, every rebel against order, every insubordinate to authority who refuses to stand idly by in the face of exploitation and oppression. What is being targetted is the search for autonomy in action, self-organization in the struggle, direct action in all its diversity, the choice to defend and disseminate anarchist and revolutionary ideas, to participate along with other rebels in self-organized and autonomous combat.

And finally, without any doubt, a combative approach of anarchism that starts off from the individual, affinity, informality.

It would be absurd to separate the repression that is striking some anarchists and anti-authoritarians today from all the repression that is seeking to subdue (often preventively) any criticism of the established order and revolt. By dint of “terrorist threats”, refugee crisis, the fight against crime and very real wars, State repression today is going into top gear. At a time when change and restructuring is changing the grounds of social conflict faster and faster, neutralizing those who disturb their thinking and their actions is part of a set that targets the exploited and oppressed: the hardening of the conditions of survival, the militarization of borders, the imposition of massive technological control, the construction of new detention camps, …

Defending oneself against this repressive coup that wants to send comrades to court on charges of terrorism is to defend any possibility and space of anarchist and anti-authoritarian action. … And, by solidarity with the accused comrades, face the State repression aimed at paralyzing all subversive action.

If fighting for freedom is a crime, innocence is really the worst of all.

Gathering every first monday of the month at 19h30 at Acrata
Next gathering: Monday 2nd of May 2016.

Translated by Act for freedom now!”