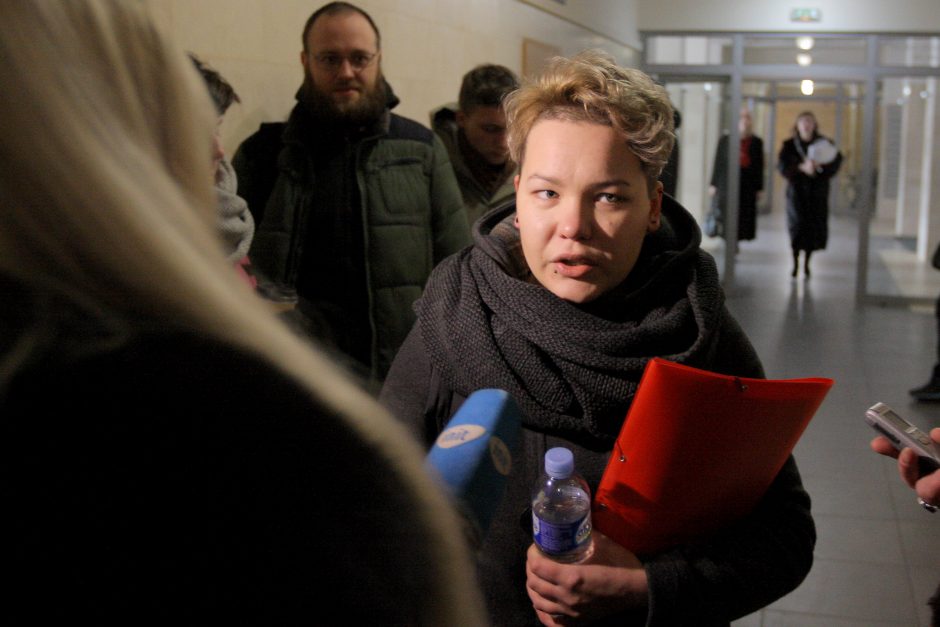 24-year-old history student Viktorija Kolbešnikova is on trial in Lithuania, charged with public incitement to discrimination, violence and physical destruction of national and social groups.

Viktorija was one of the four people caught on surveillance cameras putting up posters around the old town of Kaunas on the night of February 16, 2015. “Burn Rukla, deport the government, immigrants welcome!” the posters said in protest against the government’s restrictive migration policies.

Someone notified the police, who immediately took the posters down and launched a criminal investigation. Two people were identified, one of them Viktorija, who suspended her studies at Vytautas Magnus University after she officially became a suspect in the case.

In November of last year, Viktorija filed a request with investigating authorities asking to discontinue the inquiry on the grounds that she was protesting against the poor treatment of migrants and refugees, including those based in Rukla.

The public prosecutor still decided to take the case to court, convinced that the student had intent to incite violence.

The remote village of Rukla houses a refugee integration center, where the majority of refugees in Lithuania spend their first year learning the local language, undertaking vocational training and searching for a job.

Surrounded by woods, the center neighbors a military base and military training ground, the sounds of which remind some of the refugees of the very war they were fleeing from.

With few local job opportunities and a monthly allowance of only 71 euros, they are forced to live in poverty with no means to travel to look for jobs elsewhere. Some of the refugees feel more and more isolated, which makes for rather depressed moods in the center.

“Rukla – that‘s it. Death zone. When you get in there, you have no willingness to go anywhere, because there is nowhere to go,” claimed one of the inhabitants of the center in an interview for a survey back in 2013.

Yet the conditions in Rukla are fairly decent compared with the treatment of asylum seekers and undocumented migrants in Pabradė, the foreigner registration center, which is run by border guard officers, and, oddly enough, neighbors another military training ground – the largest in the country.

The center is known for its harsh psychological environment and tense relations between the guards and the detainees, sometimes erupting in incidents of violence.

There have been reports of the guards calling the inhabitants of the center by serial numbers instead of their names and referring to them as “nelegalai” (“illegals”), a derogatory Lithuanian term for undocumented migrants.

It is likely that drawing attention to the treatment of migrants and refugees was not the only purpose of the late night activists. The chosen date was not accidental – Lithuania celebrates its Independence Day on February 16, commemorating the founding of the state back in 1918.

The posters were displayed along the route that these marches usually take in an apparent attempt to preemptively respond to anti-immigrant slogans.

However, relying on the opinion of a linguistic expert, the public prosecutor in the case aims to prove that Viktorija and her friends were urging to use violence against refugees living in Rukla. Furthermore, the expert for the prosecution went as far as interpreting the message in the poster as potential incitement to harm military troops based in the Rukla area.

Meanwhile the defense presented five independent expert opinions with an alternative interpretation of the message in the posters, explaining to the court that the message most likely originated from Australia, and was clearly a political speech aimed at criticizing the practice of running migrant detention centers.

The third trial hearing is scheduled for late February.