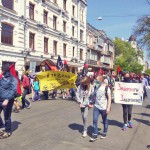 On Mayday anarchists held an unauthorized march in the center of Kiev. About 200 people took part in it. Social and antimilitarist slogans prevailed at the action. The march lasted for one hour and a half and ended near “Zhovten” cinema, that was recently burned by neo-nazis during LGBTQ movie screening. (More details about the march in video by link №1) After the event was finished, on the way to the subway, about 20 autonomous nationalists (as they introduced themselves to journalists after a couple of minutes) tried to attack anarchists. A few attackers were detained by police. Press-service of Ministry of Internal Affairs states that detainees were taken to a police station and released after identity verification (link №2). But those who’ve been on the action assert that in few seconds after an unsuccessful attack a car with inscription “Right Sector” instead of number plate appeared, whereupon all the detainees were instantly released. (link №3)

See some photos and article in Russian at link №4