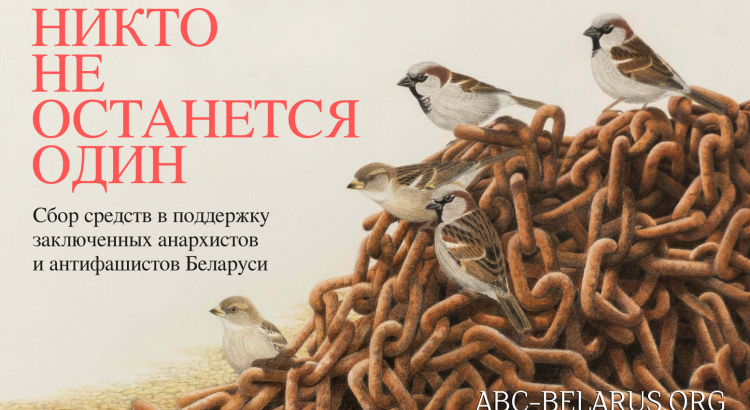 It’s been almost two years since the 2020 protests in Belarus. The anarchist movement, just like the rest of activists and jounalists, has faced the biggest crackdown ever. Many activists had to leave the country, others got behind bars. ABC-Belarus continues its activity and needs support more than ever. At the moment, there are about 30 imprisoned anarchists and antifascists in Belarus and the number keeps growing.

We are in the middle of a big trial with 10 defendants that would probably last for the whole summer. Read more about the case here – https://abc-belarus.org/?p=13936&lang=en Every week just this case alone costs us 3000 euros. Without your help, we won’t be able to provide support in this trial for long, meaning that the activists will lose their opportunity to get legal aid. Other comrades need lawyer’s visits, food parcels, appeals – all this requires more money than we are able to gather.

Any donations are more than welcome! Please share this call with your comrades and groups, organize fundraising events for us and spread the word about Belarusian imprisoned anarchists.

At the time of publication of this appeal, more than 2,000 prisoners of the 2020 uprising are in the prisons of the Lukashenko regime. Among them are at least 30 anarchists and antifascists who have been subjected to political repression, torture and imprisonment because of their political activism. Many comrades were forced to leave Belarus to avoid heavy prison sentences and violence from the regime.

Two years after the start of the protests, the political trials continue. A month ago four anarchists were sentenced to prison terms of 4.5 to 5 years in the “Pramen case”[1]. A few weeks ago, a trial began in the case of the so-called “international criminal organization of anarchists,” which is a product of the imagination of the political police. In reality, the case was cooked up for the sole purpose of destroying the anarchist movement. There are 10 people on the bench, and the trial is being held behind closed doors.

Over the past year, ABC-Belarus has spent tens of thousands of euros on lawyers, prison parcels and assistance to prisoners’ families. All this support was made possible primarily through international solidarity – we received all the donations from our comrades.

The war in Ukraine affected the amount of support for Belarusian prisoners. In the international arena, it has become a priority to support those who fight against Putin’s regime. And we believe this is the right thing to do. But the resistance against Putin’s and Lukashenko’s regime continues, including in prisons in Belarus. We believe that prisoners should not be abandoned even in such difficult moments.

Our funds are running out, and we are forced once again to start a crowdfunding campaign – only with your support we will be able to continue to help our comrades.

Your money will be used for the following:

This is the minimum that will be covered if crowdfunding is successful. If more money is raised, however, we will be able to help the families of incarcerated comrades and cover the additional cost of supporting prisoners in prison.

Until everyone is free
Anarchist Black Cross Belarus

1: An anarchist collective from Belarus, recognized by the Belarusian authorities as an extremist formation. The collective’s website is pramen.io