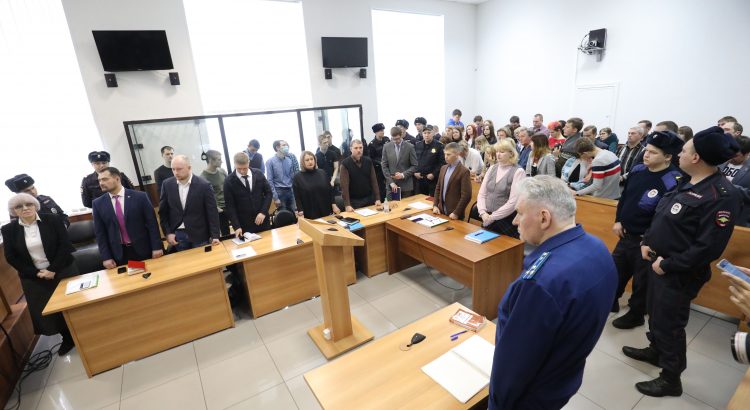 The Volga District Military Court, [sitting in Penza], has [convicted and] sentenced seven defendants in the Network Case.

Maxim Ivankin was given 13 years in a maximum-security penal colony, while Andrei Chernov was sentenced to 14 years, and Mikhail Kulkov, to 10 years. They were found guilty of involvement in a “terrorist community” and attempting to sell drugs.

Vasily Kuksov was sentenced to 9 years in a penal colony. He was accused of involvement in a “terrorist community” and illegal possession of a weapon.

The verdict handed down by the court in Penza suggests that the acquittal of the Petersburg defendants in the case is less likely, Viktor Cherkasov, the lawyer for Viktor Filinkov, a defendant in the Network Case, told Bumaga.

“It sends a message,” said Cherkasov. “It is difficult to hope [for a positive outcome], but we are still determined to protect Filinkov’s interests.”

Cherkasov said that he planned in court to point to the faked evidence in the case. He also that he would take the case to the European Court of Human Rights if Filinkov were found guilty. The next hearing in the Network Case in Petersburg should take place between February 25 and February 28. [In October 2017 and January 2018], antifascists and anarchists were detained in Penza and Petersburg. They were accused of organizing a “terrorist community,” allegedly called “the Network.” Its alleged purpose was to “sway the popular masses for further destabilization of the political situation” in Russia.

The defendants in the case said investigators had tortured them as a way of forcing them to confess and weapons had been planted on their persons and property to further implicate them. [Some of] the arrested men had played airsoft together: this, investigators, said was proof they were planning terrorist attacks.

Investigators claim that the Petersburg defendants in the case, Filinkov and Yuli Boyarshinkov, acted as the group’s sapper and signalman, respectively. Their trial is scheduled to resume in late February.