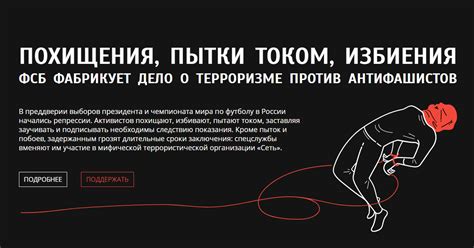 In February 2018, a campaign was launched in Russia to support those accused in the Network case. Among the main goals of the campaign were fundraising for legal costs, organizing humanitarian support for the arrested and offering support to their relatives. The resources gathered have so far been distributed according to the financial circumstances of the respective families and the needs of the arrested. Further financial support is being distributed according to the choices made by those the arrested throughout the investigation.

Currently two of the accused, Igor Shishkin, and Yegor Zorin, are firmly siding with the investigation.

Igor Shishkin has not filed a torture complaint, although traces of torture were reported on his body by the independent Public Oversight Committee (ONK). He has signed agreement prior to being present in court, which means that he has fully admitted his guilt. He is actively cooperating in the investigation of the criminal case, and also giving testimony against other suspects. If the case by the prosecution is substantiated with the testimony given by Shishkin, his sentence will be reduced (as defined in the chapter 5 of the statute 317.7 of Russian Codex of Criminal Prosecution, UPK RF). Igor is the only accused to have been visited by official Russian Ombudsman for human rights Tatyana Moskalkova, but he did not report any torture during the visit. Since then he has sided with the prosecution during a cross-interrogation with another defendant. This position is detrimental to co-defendants, and results in additional pressure for everyone struggling for themselves and for justice.

Yegor Zorin, in the autumn of 2017, after being tortured, admitted his guilt and has cooperated with the investigation ever since. He never filed a torture complaint.

In the framework of the support campaign, we do not consider it possible to support defendants cooperating with the investigation, against the interests of the other co-defendants. Thus, financial support for these defendants is not provided from the common fund. In case you want to support Shishkin, you may do so via his relatives (link).
All the defendants in the case, Shishkin and Zorin included, have been tortured and manipulated by the authorities. We are ready to provide support for Shishkin and Zorin, when they choose to take part in a collective strategy of defense, instead of an individual one.

Please send to the euro